Kathak is one of the leading forms of classical Indian dance. This ancient art of India derives its name "Kathak" from "Katha", the art of story telling. The Kathak dancers were excellent narration and story tellers, and they interpreted episodes from the great epics with gestures and music. Through an aesthetically exquisite and continuously evolving style, these story tellers of the past combined dance and music and became the progenitors of modern Kathak dance. 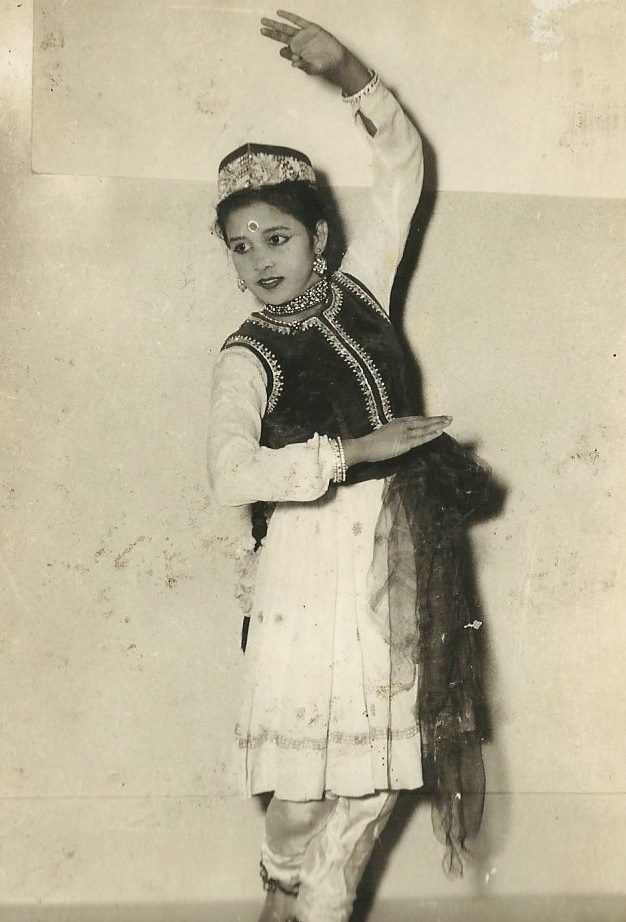 Like many aspects of the cultural life of northern India, Kathak developed through various phases of India social, religious and political history, thus reflecting its diverse impact. During the Hindu period, this North Indian dance form was nurtured in temples for glory of God. The dancers were mainly Brahmins and were held in high esteem. Interestingly, through Kathak dance was suffused mainly with Vaishnav philosophy and The Radha- Krishna theme, it passed through a period of renaissance and for a time became powerful vehicle of entertainment for the Moghul courts as they came to power in the early 16th century. Through the fusion of Indo-Moghul culture, Kathak emerged into a new form of dance. The Moghuls brought with them their Persian arts, introducing geometrical patterns and design in music and dance with a special emphasis on footwork and intricate rhythmic pattern. During this period, however, Kathak also became a source of entertainment for wealthy aristocrats, thus falling into disrepute, particularly for women.

In contrast, as the British moved into India during the second half of the 18th century, they showed little interest in Indian dance and music. Kathak was no exception. Yet, during this period, Maharaj Bindadin, the greatest of Kathak gurus, was able to provide the much needed integration of Hindu and Moghul Influences on this dance form, making Kathak a truly representative classical dance. Post-independence or modern Kathak is a mixture of both temple dance and court dance. Moreover, North Indian classical music has served as Kathak's cultural counterpart. The two art forms share many traits, such as the importance of rhythmic patterns and accents, and together, Kathak music and dance reinforce each other. Furthermore, within Kathak are a variety of styles with three main schools traditional called "Gharanas" – Jaipur Gharana, Lucknow Gharana and Benaras Gharana, each with its own characteristics and peculiarities. Kathak today has regained its old glory, its rightful place amongst the classical arts of India and is deservingly one of the most popular classical Indian Performing Arts forms.

Contemporary dance is the name for a modern concert dance genre.

Like any other contemporary dance form, Indian contemporary dance is not a specific dance technique but a collection of methods developed from classical and martial art forms of India and can take on many forms including dance fusion, emergent dance and revisionism. 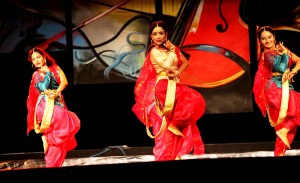 Their dance holds the power to transform the ordinary, through rich imagery, physical articulations and dynamism. From ideas to movement,their creations are inspired from Indian aesthetic frameworks and sensibilities. Using indigenious forms, technology and interdisciplinary approach they deliver “ artistic entertainment” to a global audience.The classical and contemporary dance in India flow into one another and draw content from each other to create new, unique and modern compositions.

Manipur has won recognition through the matchless grace of its dance technique, Manipuri Dancing. Manipur in the north –east corner of India has evolved a unique pattern of life. It is unique in the sense that there is a perfect blending of music and dance with the day to day life of the people.

Though its past is lost in dim antiquity many legends and myths are woven around Manipur and its dancing. The nature of Manipuri Dancing is classical, traditional and scientific. The analysis and classification of various dance movements and forms faithfully adhere to the basic laws of anatomy, psychology, and aesthetics.

Manipur has passed on from generation to generation this noble heritage of dancing, in its pure and original form. There is no occasion in the social or religious life of Manipur, which is not celebrated by an appropriate and characteristic dance. Vaishnavite religious themes and particularly the life story and divine love of Radha and Krishna pervade most of these social and religious festivals.

The distinguishing trait of Manipuri is an expression entirely through body movements. A delicate balance is achieved between movements of the different parts of the body, rejecting emphasis on any one part. Dramatic potentialities and a variety of types and forms of Manipuri Dancing are skillfully exploited in their numerous dance dramas. 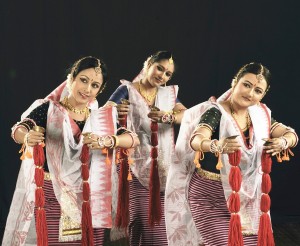 Rasleelas and Sankirtan are the highly developed aesthetic forms revealing the religious feelings of the people of Manipur. Rasleelas go on for 8 to 10 hours in the temple courtyard from dusk to dawn. The religious people of Manipur shed tears of joy experiencing it as the real spirit of the Lord. All the technical elements mentioned in the Sangeet Shastras are found in Rasleelas such as Nritta (pure dance), Nritya (interpretative dance) and Natya (theme expressed through 4 kinds of abhinaya), two distinct divisions of tandava and lasya, the prabandhas (musical compositions). The songs are sung in Brajaboli, old Bengali,meitheli Sanskrit, Braj and now in Manipuri language written by devotional poets like Chandidas, Vidyapati, Gyandas, Jaydev and others. They have a variety of talas ranging from 4 beats to 68 beats and their various rhythm patterns as well as dances on Nritta and Nritya prabandhas.

Manipuri Dance is one of the most graceful and lyrical dance styles in India. The swaying movements of the neck and torso are inspired from the bamboo trees lilting in the breeze.

Manipuri Dance style has its own typical set of colourful costumes and décor. It also has an appropriate musical score playing a complimentary role. These are evolved to suit the nature and spirit of the social functions and religious festivals.

Dancing in Manipur has been fulfilling its function to the fullest throughout the centuries in relation to both the individual and the society. To the individual it has brought spirituality and to the society solidarity through purest delight.