Rinku Bhattacharya Das was initiated to the world of Kathak dance by her mother Smt Mallika Bhattacharya disciple of Guru Acchan Maharajji and Guru Laxminarayanji of Gunijankahana Jaipur. Ever since winning the prestigious Indian national dance scholarship from West Bengal Governor B.D. Pande at age 5 she continued her  training from Smt Bela Arnab ( Dean of Kathak dance Rabindra Bharati University). She broadened her understanding of indian  classical dance forms by receiving rigorous  training in Manipuri Dance from  Guru Bipin Singh,Kalavati Devi and Padmashri Darshana Jhaveri. She was introduced to the world of contemporary dance by renowned Manipuri and Contemporary Dance artiste Sri Sanjib Bhattacharya .  As a solo and a performing artiste in both  classical and contemporary art forms she has performed in various prestigious dance programmes and festivals of India and USA. She is currently the Director of Nrityajyotidance Academy, North Carolina, USA which is devoted to the dissemination, training and promotion of the classical as well as contemporary performing arts based on Guru Shishya tradition and helps in promoting  them  internationally. 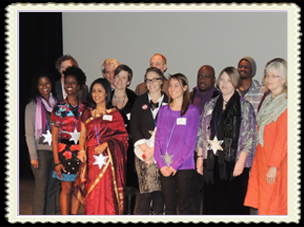 Some of her Major Performances in India and abroad:

Smt Mallika Bhattacharya and Guru LaxmiNarayanji (To be uploaded)